The Portuguese firm signed two deals last month – one with native food firm Frulact (which supplies fruit-based ingredients globally and markets its own beverages and smoothies), the other with frozen desserts firm Santini.

Allma supplies sun-grown Chlorella vulgaris powder from a purpose-built facility 100km north of Lisbon finished at the end of 2013 - click here to read a great piece on the firm's production methods by my colleague Shane Starling​. Here microalgae grows in transparent, water-based tubes and is later harvested and dried.

The resultant powder is extremely high in protein – 55-60% of biomass – and is also rich in vitamins, chlorophyll (which gives it its green color and has been linked to nutritional), polyunsaturated fatty acids (PUFA) and minerals.

Sofia Mendonça, business development manager at Allma, tells BeverageDaily.com that the phytochemical rich microalgae powder is a “great, high quality vegetable protein source”​ that has a natural home in the juices and smoothies space.

Frulact collaborated with Allma to produce a bubble tea with chlorella-filled pearls – another promising application given that the algae is mixed to form a sweet-tasting emulsion inside bubbles – and Frulact now seeks partners to take the drink to market.

Mendonça explains that in its liquid extract form the ingredient is not as nutrient-rich, although for “technical purposes”​ it would be simpler to mix in a tea or water.

Historically, chlorella powder has been developed from open water-based systems in Asia (Japan, China, Taiwan and Korea) but Mendonça says Allma has stricter quality and safety controls than these suppliers – to meet Western standards.

Traditionally chlorella is used as a dietary supplement – either in powder form, or as an ingredient in pills, capsules, granules and tablets, but Allma believes it has a bright food and beverage future.

She says the price/quality ratio is acceptable in terms of using chlorella in a drink, with some microalgae-based products already out in the States and others being commercialized in Europe.

That said, Mendonça admits there is a taste barrier facing the ingredient, since Allma doesn’t adulterate the ingredient to mask its flavour, “so there are certain applications where the chlorella taste is not so pleasant, as it’s an algae”.​

“It’s a vegetable, a natural ingredient coming from water – it reminds people of seaweed or green tea. Some people like it, others don’t at all – it’s about getting used to a new flavour,”​ she says.

“To overcome flavour obstacles the secret lies in pairing this ingredient with other strong tasting ingredients, for example, so the final flavour is nice,”​ she adds.

Another problem is deciding where chlorella should sit as a functional ingredient – fans wax lyrical about everything from weight loss benefits to Type 2 diabetes treatment, while the high protein content clearly makes it an interesting play in the sports nutrition space.

“On the fitness side, chlorella is normally known in the dietary supplement space for detoxifying the body. It promotes your metabolism. More accurate clinical trials are certainly needed to affirm this, but it is expected that chlorella might have this functionality​, Mendonça says.

She explains that Japan has the more ancient history in terms of chlorella study and consumption – they’ve studied it for nutritional and functional purposes and are ahead in terms of finished products containing chlorella, which we don’t see in the US and Europe.

But she says chlorella could follow in green tea powder matcha’s footsteps as a 'super ingredient' that becomes a star in its own right when used in different drinks brands, rather than ‘just another’ ingredient.

Mendonça adds that Allma’s main goal is to encourage the uptake of chlorella within people’s daily diets, and cites Europe, the US and Canada and later South America as the most promising markets.

We ask her if, beyond smoothies, juices and bubble tea, there are any beverage formulations where incorporating chlorella might prove especially challenging?

Mendonça replies that including the microalgae in a soda or an energy drink with a low pH might prove difficult, given that it is so rich in chlorophyll – an acidic environment will degrade this.

While nano-technology or encapsulation might prevent this problem this would require a significant R&D investment to ensure proper stability, she adds. 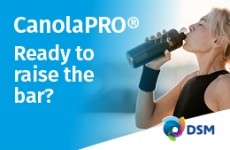